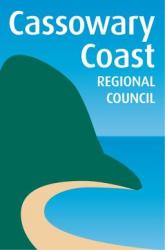 The Cassowary Coast Region is a local government area in the Far North Queensland region of Queensland, Australia, south of Cairns and centred on the towns of Innisfail, Cardwell and Tully. It was created in 2008 from a merger of the Shire of Cardwell and the Shire of Johnstone.

The Regional Council, which administers the Region, has an estimated operating budget of A$64 million.