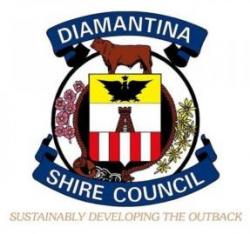 The Shire of Diamantina is a local government area in Central West Queensland, bordering South Australia and the Northern Territory. Its administrative centre is in the town of Bedourie.

Like most places in Queensland with the "Diamantina" name, it was named after Lady Diamantina Bowen (née Roma), the wife of the first governor of Queensland, Sir George Bowen.

It covers an area of 94,731 square kilometres (36,575.8 sq mi), and is the second largest LGA in the state. The shire was established in 1879. The town of Birdsville is home to the Birdsville Races, a horse race meeting to raise money for the Royal Flying Doctor Service.