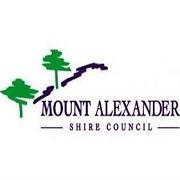 The Shire of Mount Alexander is a local government area in Victoria, Australia, located in the central part of the state. It covers an area of 1,530 square kilometres (590 sq mi) and, in June 2018, had a population of 19,514. It includes the towns of Castlemaine, Maldon, Newstead, Harcourt, Taradale, Vaughan, Fryerstown and Campbells Creek. It was formed in 1995 from the amalgamation of the City of Castlemaine, Shire of Newstead, and most of the Shire of Maldon and Shire of Metcalfe.

The Shire is governed and administered by the Mount Alexander Shire Council; its seat of local government and administrative centre is located at the council headquarters in Castlemaine, it also has service centres located in Maldon and Newstead. The Shire is named after the original name for the Castlemaine region and goldfields.