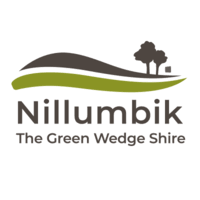 The Shire of Nillumbik (/ˈnɪləmbɪk/ NILL-əm-bik) is a local government area in Victoria, Australia. It contains outer northern suburbs of Melbourne and rural localities beyond the urban area. It has an area of 432 square kilometres and at the 2016 Census, the Shire had a population of 64,941. It was formed in 1994 from the merger of parts of the Shires of Eltham, Diamond Valley, Healesville and the City of Whittlesea. The Shire uses the tag-line The Green Wedge Shire.

The shire's name is derived from the Parish of Nillumbik, which was named in the 1830s the term nyilum bik meaning "Bad Earth" in the local Aboriginal language Woiwurrung.

On 13 October 1998, Nillumbik Council was suspended by then Local Government minister Rob Maclellan, with the state government declaring that infighting was affecting the ability of the council to function.

Nillumbik was rated third of 590 Australian local government areas in the BankWest Quality of Life Index 2008.