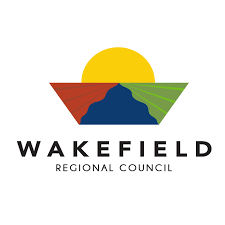 Wakefield Regional Council is a local government area in the Yorke and Mid North region of South Australia. The council seat is at Balaklava.

On the west side of the Wakefield Regional Council's area is the coastal fringe along the north east of Gulf St Vincent and the Hummocks and Barunga ranges. The area spans wide fertile plains to the north Mount Lofty Ranges on its eastern border. Immediately to the east of the Hummocks and Barunga ranges are a series are low-lying salt lakes, of which Lake Bumbunga is the largest.[8] The Wakefield River, from which the council name derives, flows from east to west across the council region approximately a third of the way from south to north border. A portion of the River Light and its confluence with the Gilbert River forms the south eastern border of the council area.