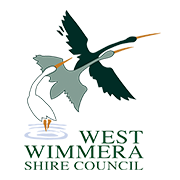 The Shire of West Wimmera is a local government area in the western part of the Wimmera region of Victoria, Australia, located in the western part of the state. It covers an area of 9,108 square kilometres (3,517 sq mi) and in June 2018 had a population of 3,862. It includes the towns of Apsley, Edenhope, Goroke, Gymbowen, Harrow, Kaniva, Minimay, Nurcoung and Serviceton. It was formed in 1995 from the amalgamation of the Shire of Kaniva and parts of the Shire of Kowree, Shire of Arapiles and Shire of Glenelg.

The Shire is governed and administered by the West Wimmera Shire Council; its seat of local government and administrative centre is located at the council headquarters in Edenhope, it also has a service centre located in Kaniva. The Shire is named after the Wimmera region, in which the LGA occupies the western portion. The LGA is also located entirely to the west of the Wimmera River, which actually meanders through another municipality to the east, that is the Rural City of Horsham.