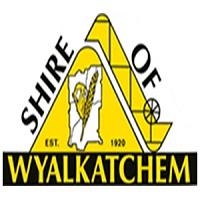 The Shire of Wyalkatchem is a local government area located in the Wheatbelt region of Western Australia. Its seat of government is the town of Wyalkatchem, about 190 kilometres (118 mi) northeast of Perth, the state capital.

On 18 June 1920, the Wyalkatchem Road District was created out of land previously administered by the Ninghan and Dowerin Road Boards. On 1 July 1961, it became the Shire of Wyalkatchem under the Local Government Act 1960, which reformed all remaining road districts into shires.