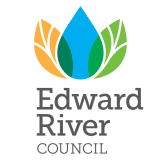 The Edward River Council is a local government area in the Riverina region of New South Wales, Australia. This area was formed in 2016 from the merger of the Deniliquin Council with the surrounding Conargo Shire.[2] The combined area covers the urban area of Deniliquin and the surrounding region to the north and west across the pastoral southern Riverina plains. The inaugural Mayor of the Edward River Council is Norm Brennan, elected by the Councillors on 20 September 2017.