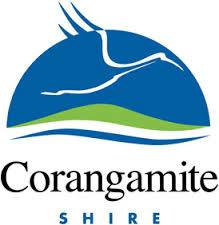 The Shire of Corangamite is a local government area in the Barwon South West region of Victoria, Australia, located in the south-western part of the state. It covers an area of 4,408 square kilometres (1,702 sq mi) and in June 2018 had a population of 16,140. It includes the towns of Camperdown, Terang, Cobden, Timboon, Port Campbell and Skipton. It was formed in 1994 from the amalgamation of the Town of Camperdown, Shire of Hampden, Shire of Heytesbury, and parts of the Shire of Otway, Shire of Mortlake and Shire of Warrnambool.

The Shire is governed and administered by the Corangamite Shire Council; its seat of local government and administrative centre is located at the council headquarters in Camperdown. The Shire is named after the major geographical feature in the region, Lake Corangamite, which is located on the eastern boundary of the LGA.