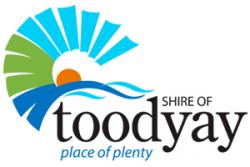 The former Toodyay Court House in Toodyay, Western Australia has been used as municipal offices for Toodyay since the 1950s.

The main part of the building (designed by George Temple-Poole) was constructed in 1896 and opened in January 1897. It replaced the first courthouse on the site built in 1867 from plans by Richard Roach Jewell. The site had also been the location of a convict hiring depot; one of four established in the colony after convicts were introduced in 1850.