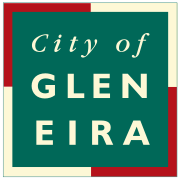 The City of Glen Eira is a local government area in Victoria, Australia. It is located in the south-eastern suburbs of Melbourne. It has an area of 38.4 square kilometres (14.83 sq mi) and has an estimated population of 140,875 people (51.6% female and 48.4% male). It was formed in 1994 from the merger of the City of Caulfield and parts of the City of Moorabbin, and takes its name from two local landmarks - Glen Eira Road and Glen Eira Mansion.