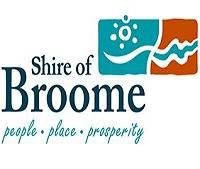 The Shire of Broome is one of the four local government areas in the Kimberley region of northern Western Australia, covering an area of 55,796 square kilometres (21,543 sq mi), most of which is sparsely populated. The Shire's estimated population as at the 2016 census was 16,222 most of whom reside in the town of Broome. Many Aboriginal communities are within the Shire, notably Beagle Bay and Bardi (One Arm Point).